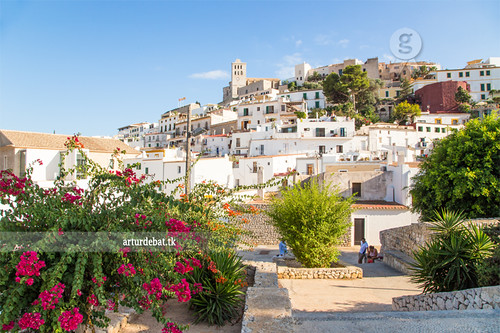 FOR SALE ON GETTY IMAGES

Ibiza (Catalan: Eivissa [?j?vis?])[p] is an island in the Mediterranean Sea, 79 kilometres (49 miles) off the coast of the city of Valencia, in eastern Spain. It is the third largest of the Balearic Islands, an autonomous community of Spain. Its largest cities are Ibiza Town (Catalan: Vila d’Eivissa, or simply Vila), Santa Eulària des Riu, and Sant Antoni de Portmany. Its highest point, called Sa Talaiassa (or Sa Talaia), is 475 metres (1,558 feet) above sea level.

While it is one-sixth the size of nearby Majorca, Ibiza is over five times the size of Mykonos (Greece), or ten times the size of Manhattan Island. Ibiza has become famous for the association with nightlife and the electronic music that originated on the island. It is well known for its summer club scene which attracts very large numbers of tourists, though the island’s government and the Spanish Tourist Office have controversially been working to promote more family-oriented tourism.

Ibiza is the home of the noted port in Ibiza Town, a popular stop for many tourists and now a UNESCO World Heritage Site.[1]

Ibiza and the nearby island of Formentera to its south are called the Pine Islands, or "Pityuses".