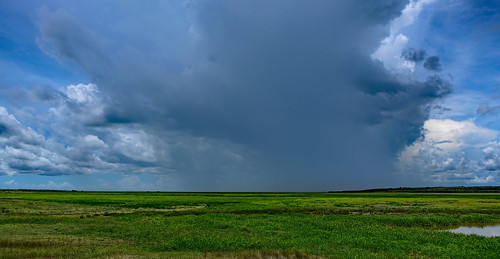 Image by Geoff Whalan
FOGG DAM CONSERVATION RESERVE, MIDDLE POINT, NORTHERN TERRITORY, AUSTRALIA
The Fogg Dam Conservation Reserve is a protected area consisting of a wetland area approximately 70 km (43 mi) east of Darwin in the Northern Territory of Australia. It lies within the Adelaide and Mary River Floodplains, which is an Important Bird Area.
It attracts a wide range of local and migratory water birds and other wildlife, including a large population of agile wallabies and one of the largest populations of snakes within Australia (including the Water Python and Death Adder), and includes a several raised observation platforms.
Saltwater Crocodiles (Crocodylus porosus) and Freshwater Crocodiles (Crocodylus johnstoni) can be seen at Fogg Dam all year around.
Fogg Dam Conservation Reserve is only a 45-minute drive from Darwin. It is one of the most accessible places in the Northern Territory (NT) to experience spectacular wetlands and wildlife throughout the year.